PCEB’S BE @ PENANG 2019 GETS THE MEETINGS SHOW, LONDON ON BOARD AS OFFICIAL SHOW PARTNER 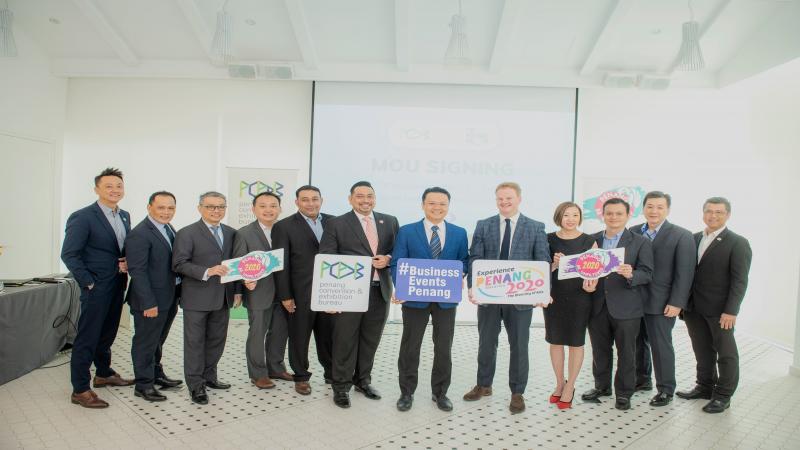 Penang Convention & Exhibition Bureau (PCEB) and The Meetings Show (TMS) London signed a strategic partnership today that sees TMS as the official show partner for the upcoming BE @ Penang 2019. The partnership brings UK’s largest corporate meetings and incentives tradeshow and Penang’s homegrown business events conference closer. BE @ Penang is Malaysia’s largest business events conference. It takes place from 5 – 6 December, concurrently with the ICCA Asia Pacific Summit at Setia SPICE Convention Centre. Built on the foundation of knowledge exchange and analysis of the business events industry, BE @ Penang 2019 will be in its fourth year running and will see global industry leaders sharing valuable insights. The signing was carried out at newly opened The Prestige Hotel and attended by The Honourable Mr Yeoh Soon Hin (Penang State Executive Councillor for Tourism, Arts, Culture & Heritage), Mr Ashwin Gunasekeran (Chief Executive Officer of PCEB), Mr Ross Barker (Commercial Director of The Meetings Show, London) and partners of the Business Events Penang industry that have attended the show for the previous years. “The United Kingdom is an important segment in terms of corporate meetings, and we would like to further grow the market for Business Events Penang. I believe that with this partnership, we are able to look at a long-term market establishment for Penang,” said Ashwin Gunasekeran, Chief Executive Officer of PCEB. “The relationship between Penang Convention & Exhibition Bureau and The Meetings Show runs deep and the show is extremely honoured and privileged to be partnering for the upcoming BE @ Penang. Since its inception in 2016 BE @ Penang has quickly become an integral gathering for those in the business events sector looking to strengthen relationships and build new connections within the region, said Ross Barker, Commercial Director of The Meetings Show. “In a similar way The Meetings Show, which is entering its 8th edition in 2020, is also an integral part of the UK’s meetings and events sector. The show is the only hosted buyer lead MICE event in the UK and the British Meetings & Events Industry Survey’s number 1 visited trade show for UK outbound buyers, and is where over 5,000 event professionals converge over two days to learn, share, network and of course do business. The UK’s outbound meetings and events sector is robust, stable and lucrative. Asia and more importantly Southeast Asia is of increasing importance for our planners, hence why we are seeing the region so well represented at the show over the past 4 years,” he added. For the past three years, PCEB together with other Penang partners have joined The Meetings Show to attract more corporate meetings into Penang. In 2017, the Penang Pavilion made its debut with seven partners and nine partners in 2018. The Meetings Show is the premier event for the UK inbound and outbound meetings industry, taking place at Olympia London annually in June. Registration for BE @ Penang 2019 is now open at www.beatpenang.com .