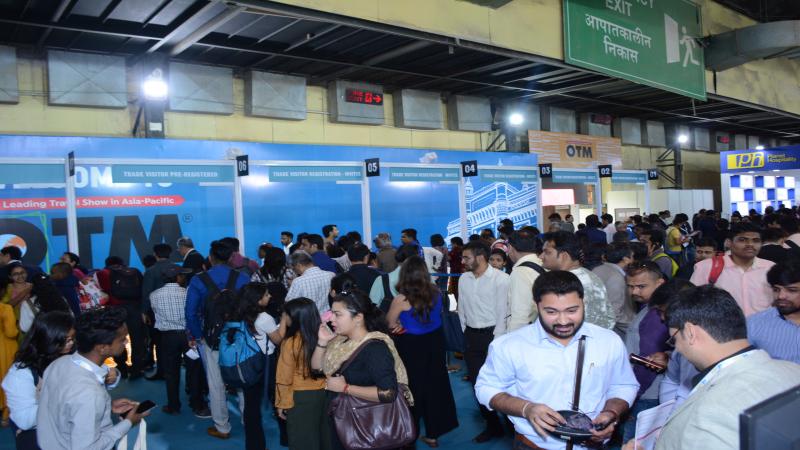 Participants from 50+ Countries and many Indian States and Union Territories exhibited their destinations at OTM 2019, held at the Bombay Exhibition Centre from January 23 to 25.

Over 15,000 travel trade visitors attended the three-day show along with more than 800 top buyers from travel trade and corporate sectors who had qualified for special hosting privileges.

K J Alphons, Hon’ble Minister of State for Tourism (Independent Charge) was the Chief Guest on the second day of the show. He took a tour of the show and interacted with various participants. He also launched the Cine Tourism Report, a report on promoting film tourism within India sponsored by OTM and prepared by Ernst & Young.

Alphons remarked, “I am extremely happy to be here at OTM 2019.The report of World Travel and Tourism Council 2018 shows India is at rank 3 in power and performance after China and the United States. The revenue generated from tourism last year was USD 234 billion. We employ 82 million people in the tourism sector. Film Tourism also gives huge potential and I am happy that the Prime Minister has announced a single window system with I&B Ministry and all clearances for all the States would be issued centrally.”

Anil Kumarsingh GAYAN, SC, M.P., Minister of Tourism, Government of Mauritius said, “OTM has done a wonderful job in organising this fair. This is a great occasion to showcase not just what India has to offer but also what other participants have to offer. Tourism is a major pillar of the economy. I would like to thank the organisers of OTM for making me the Guest of Honour. I look forward to working very closely with OTM in the years to come.”

Satpal Maharaj, Minister of Tourism, Government of Uttarakhand said, “It has been a wonderful experience at OTM 2019. We actually get to know what people are promoting and what the visitors want. OTM is the ideal place for inbound and outbound tourism. I congratulate Team OTM and they should do more and better. This is a good opportunity that OTM has provided to understand what is happening in the world and what we should do. I will support and participate in the upcoming OTMs.”

Hon. Minister of Tourism, South Africa, Derek Hanekom walked the show on the evening of the first day. He remarked, “This is my first time at OTM and I'm utterly impressed with the quality of the exhibits and I'm quite overwhelmed. I had a great experience at OTM 2019 and you are enticing us to want to be here ourselves. I would like to congratulate Team OTM. Good job!”

OTM 2019’s Premium Partner Country, Indonesia was very happy to be part of OTM and their entourage of tour operators stood testimony to the fact. Dr. Raden Sigit Witjaksono, Director, Minister of Tourism, Republic of Indonesia said, “India is our main market, ranks 2 after China in tourist arrivals to Indonesia. OTM is one of the mediums that helps us to showcase and promote Indonesia and places beyond Bali. We look forward to have more cooperation from Indian market through OTM. We are happy to participate as the premium partner for OTM 2019.”

Besides showcasing their myriad tourist attractions, Indonesia Tourism presented an array of cultural offerings during the show. Representatives from Indonesia’s travel and tourism industry under the umbrella of The Ministry of Tourism, Republic of Indonesia discussed their India-specific tourism promotion plans during OTM 2019.

OTM Mumbai has yet again emerged as the largest travel trade show in Asia-Pacific, both in terms of participating sellers and rented area.

The show is a gateway to India’s 22 million outbound travellers and a billion-strong domestic travel market. It provides travel professionals with an opportunity to showcase their business at one of the largest travel source markets in the world. With the Ministry of Tourism, Government of India by its side, OTM saw active participation from the Ministry in several aspects. The Ministry not only sponsored Hosted Buyers from abroad to visit the show, it also supported the Cine Tourism Workshop on the inaugural day.

This year, the OTM Forum focussed on innovation and technology in travel. There was an interesting line-up of panel discussions conducted on the sidelines of the mart. Eminent experts and leaders from the industry deliberated on digital marketing and social media in travel, the influence of AR/VR and other subjects related to Domestic, Inbound, Outbound, MICE and Niche Tourism. Eminent speakers from companies like Thomas Cook Group, Travel Boutique Online, Thomas Cook India, AirAsia, Lonely Planet India, Thrillophilia.com, Oberoi Hotels & Resorts, GoIbibo, Jet Airways, Indigo Airlines, Booking.com, Jio Studios, Phocuswright Inc., TravHQ and others were present.

CineLocales Lounge within OTM was a marketplace connecting the world’s largest filmmaking community to global destinations. 50+ top production houses like Yash Raj Films, Dharma Productions, Viacom and many others visited CineLocales at OTM 2019.

Cruise Hub provided an opportunity to travel traders to connect with the cruising community in India and abroad, expand their network and enhance business prospects.

OTM India’s Top 100 Travel Producer Awards were also presented at the show. Hundreds of travel producers from all over India attended the show and received the award.